today I present you my own baby, Painted Love.

Before that, I want to talk to you about something that had happened just the other day, something that kind of rubbed me the wrong way, and that’s totally disconnected to the book (the day after having a preorder link, talking about random stuff is just the smart thing to do, right?).

Well, before I go on and on about how much I love the Hero of this story, Rhett, let’s talk about the romance genre and men’s reaction to (read: ridicule) it. It might be the genre that sells the most and has the biggest volume of material, but romance also has a bad rep.

A few days ago, I was surfing FB while waiting for my husband to pick me up and a post caught my attention. A fellow writer reported what had happened to her romance writer’s friend. Apparently, the girl had seen a famous person in a bookstore. He took a romance book from a shelf, took a picture of the cover, and wrote a derisive post on his social media. Of course, being his fan, the writer saw the post. She’s not a fan anymore, btw.

Just to be clear, I’m not starting a discussion on the cover market and the undeniable amount of abs and muscular men on covers. Hey, women have eyes and we like to see attractive men. Shocking. Women have been half naked pretty much everywhere in the art industry since the beginning of time and nobody ever even blinked, so I don’t get the double standard now. We can be ogled and ‘appreciated’, but can’t do the same. Mh.

My point here is that men, sometimes and not all of them, are so dumb.

They make fun and like to talk down a genre that could help them oh, so much. Funny thing, the ones that mock romance novels are the ones that would need them the most.

Well, all they have to do for a thorough insight of what women want is taking a couple of good romance novels and read them.

No, in our day to day life we don’t expect a man to save us from a psychopath or a werewolf. Forget plots, and subgenres, and everything that’s not the characters’ core, and you’ll find shared truths.

Women want energy. Of any kind and color.

Women want to see and feel they are important. They want to hear it. How much, and in what way, vary from couple to couple, but it’s always there.

Women want respect. For their ideas, actions, and lifestyles.

Women want men who know when it’s time to shut up and lend a shoulder for us to cry on. Maybe we need his help, maybe not. What we need is the emotional support.

Now, if all those dumbasses out there, the ones ready to ridicule an entire literary genre, would pick one of those books, they would find answers, bits of advice, and ideas on to make their women (assuming they have one) happy.

The bad news is, I’m not deluding myself thinking it will happen. The good news is that we, romance writers, have (for the most part) not only fantastic partners, but sons, too. Those babies, kids, young men see their moms’ struggle, satisfaction, pride and devotion to the art. We have daughters that will take the struggle, satisfaction, pride and devotion to the next generation.

As for us, let’s keep writing despite the stupids and the ignorant. Or exactly for them.

Well, just when you think hope is long gone… January Jones just told me that this story has a happy ending!

Here’s the link to the article that lifted my jagged soul:

Now that the world is nice again, let’s focus on the real deal. 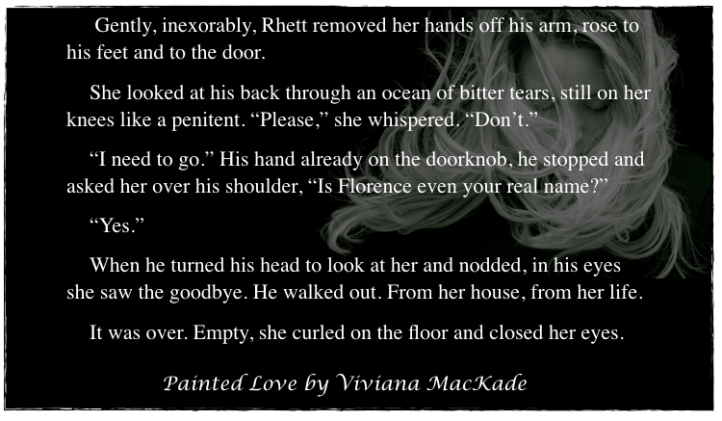 Thou shalt not steal.

Oh, but Florence had, and would do so one last time.

Ten pieces her grandfather painted for her because he loved her.

Ten pieces her mother lost, along with anything else, for loving the wrong man.

She couldn’t get back everything he’d wasted away, but she’d be damned if she’d give up those paintings.

Easy and genuine, Rhett loves his life–his family, his market, his town. Until he meets a British woman with grey eyes and a cute little smile. The woman he’s been waiting for.

The thing is, to love her is easy, but can he trust her?When Rhett pushes to uncover her agenda, Flo knows she will lose something–the man she loves or what she’d been fighting for years.

When Rhett pushes to uncover her agenda, Flo knows she will lose something–the man she loves or what she’d been fighting for years. Which road will she choose?

It’s going to release on the 30th, but get your copy today for 0.99 $ or FREE with KU. Paper will follow soon.

Florence Harper closed her mobile phone and put it back into her purse.

The end was coming.

In the dark late afternoon, a group of underdressed young witches strolled by the bench she sat on. Drunk already, judging by the disarticulate chuckles and screams. She never cared for any such thing. Never had time for it.

The muddy water of the Thames kept flowing. Always had, always will. Her life? That was about to change. For the better, she hoped.

Jacob had found Painted Love: the last piece of her broken heart was hiding in a small town on the other side of the ocean.

For Florence, it was only the place where she’d sin one last time.

Thou shalt not steal.

Oh, but she had, and she will.

All her life, or her adult life, had been touched by love one way or another.

The day she was born, her grandfather had made Painted Love. After, each year on her birthday he would give what he called a piece of his own heart to her. Only to her. The collection stopped after her tenth birthday, when Grandfather Paul passed away.

And soon after, her widowed mother remarried. Flo would never know if the decision came out of pure love, loneliness, or naiveté. But she did remarry. A bastard, of course. Within a few years, he’d bet and lost all. Money, properties, art. A divorce didn’t change anything as it turned out, banks didn’t care much about it, or death.

The bastard didn’t live long. Official cause of death: blunt trauma from a fall. Word on the street was that someone had made that happen. For as much welcomed his demise was, herself, her mom and Joseph, the bastard’s only son, had to work themselves to the bone to get on their feet again.

They did, though. Tired, depressed for all the mistakes she’d made, and unable to overcome guilt, her mom managed to have a couple of quiet years before she gave up and united with her father and her beloved first husband, Flo’s dad.

But no matter how much of a successful photographer she’d become, or how much of a brilliant art curator Joseph was, the past haunted them. Florence couldn’t forget what was taken away from her; Jacob couldn’t shake off the shame of his own father’s actions.

So, they decided to act, right some of the wrongs.

She would take back those ten pieces her grandfather made for her because he’d loved her, and her mother lost because she’d loved the wrong man. That man’s son would help her achieve justice.

And finally, Jacob had tracked down the last painting, the smallest one, through his private channels. Flo knew better than asking the hows, but she trusted him completely. Problem was, the actual owner of the Painted Love didn’t want to sell, no matter the money offered, and that meant one thing: for one last time, she’d have to steal.

Well, it appeared she’d be taking a holiday. A vacation, as they would say in America.

She grabbed the mobile phone and started to plan.

I hope you’ll read it and enjoy it!