Well, I’d say the tropics are about to get very, very hot!

Stuart Jenner’s job is high stress, high stakes, and everything he’s strived for. So why, when the apex of his career is within reach, does he stumble? At his doctor’s insistence, he books a privately chartered yacht to sail around the Whitsundays for two weeks of sun, surf, and sex. When his friend-with-benefits bails on him at the last minute, Stuart decides to go alone.

Foster Knight left the rat race behind six years ago, bought a yacht, and now calls the Great Barrier Reef his home. Sailing tourists around tropical waters is all in a day’s work, and he’s never been happier. When his next client arrives alone, the two-week charter will be the most private job he’s ever had.

Foster can see how stressed and exhausted Stuart is, and he promises him extensive rest and relaxation. Stuart slowly realises his original plan for two weeks of sun, surf, and sex might not be lost yet. Confined to a yacht, isolated by aqua-coloured oceans and the sweltering sun, Stuart and Foster are about to find out just how hot the tropics can get. 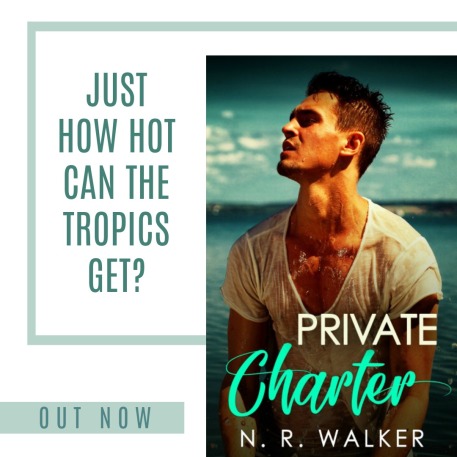 “You know what we do need?” he said, standing up and disappearing down into the cabin. He appeared a second later with a bottle in one hand, two lemons in his other. “Tequila.”

I snorted out a laugh. “My favourite cocktail mixer. A shot of tequila with a dash of good intentions and you have a cocktail aptly named ‘What the Fuck Have I Done?’.”

Stuart laughed as he trudged up the stairs. His towel was long gone; just his tiny scrap of swimwear remained. “Well, two What the Fuck Have I Dones? coming right up.”

He sat back beside me and held up the bottle. “What even is this?”

He gave me a sultry grin. “Oh, believe me. I love things that go down easy.” I rolled my eyes, but he laughed as he quartered the two lemons on the plate. When he was done, he took the lid off the bottle and a piece of lemon. “Lick, sip, suck. You game?”

He chuckled. “Well, you do. But I can see in your eyes what you want. You just need a little Mexican courage.”

I looked at the bottle and then the lemon he was holding. “You don’t have any salt.”

His voice was rough and he grinned salaciously. “Oh yes, I do.”

Then he leaned in, and licked up my chest to my neck. I was stunned, speechless, and he laughed, took a small swig of tequila, then sucked on the lemon. He shook his head and breathed through the burn of alcohol and sour lemon.

“Oh, that is good,” he said. I didn’t know whether he was talking about licking the salt off my skin or the tequila. “Your turn.”

He shoved the bottle in my hand and held out a piece of lemon. I was done with the push-and-pull game. I was done with not touching or tasting the platter of man on offer in front of me. I could still feel the burn of his tongue on my skin.

His pupils dilated, his nostrils flared. Oh, he likes being told what to do. Then he parted his lips, just enough for me to slide the lemon in. I leaned right in, almost pushing him backward so I was over him, and I licked from his collarbone to the edge of his jaw. The salt on his skin from the ocean, from the humidity, was tangy on my tongue. He moaned as I licked up and nipped the angle of his jaw with my teeth. I took a quick swig of tequila, then held the back of his head and took the lemon from his mouth.

It was a tangle of salty lips, sweet tongues, and sour lemon. It was the most delicious kiss I’d ever had.

I pulled back with the slice of lemon between my lips and slowly drew it out of my mouth. He was panting, his lips wet, his chest heaving, his cock hard across his hip, barely confined in his Speedos.

He snatched the bottle from me, took a piece of lemon, then stood up and straddled me.

N.R. Walker is an Australian author, who loves her genre of gay romance. She loves writing and spends far too much time doing it, but wouldn’t have it any other way.

She is many things; a mother, a wife, a sister, a writer. She has pretty, pretty boys who live in her head, who don’t let her sleep at night unless she gives them life with words.

She likes it when they do dirty, dirty things…but likes it even more when they fall in love.

She used to think having people in her head talking to her was weird, until one day she happened across other writers who told her it was normal.

She’s been writing ever since…

Follow the tour for interviews with the author, the character, and guest posts.February 1, 2022
Get Valkyrie Love for 99 cents wile in preorder.