I’ll admit I’m not a big fan of bad language. I’ll surely go and have my moments of, let’s say, un-ladylikeness (and keep in mind I’m Italian, so passion runs deep-or bursts out loud), nut as a general rule it’s not something I appreciated. So goes with my Heroes and Heroine. This blurb… something pulled me to it despite not being, well, gentlemen-like. I liked the dude’s voice, for as loud and a bit out there as it was.

The book is Deal Takers by Laura Lee, out a few days back in the Comedy, New Adult, Romance Genre.

MY DICK CAN BE A REAL BASTARD SOMETIMES.

When he takes charge, I’ve been known to do a lot of stupid shit, despite the fact that I have a genius IQ. Case in point: How I met the woman of my dreams.

Now, I’m going to let you in on a little secret: I don’t regret that moment of idiocy one bit. It may have been one of the most embarrassing moments of my life, but you know what they say about first impressions, right? Well, I can guarantee that I made quite the impression that evening. (Don’t worry; I’ll tell you all the gory details later.)

Most days, she acts like she hates me—probably because I behave like an ass— but we both know the truth: Rainey O’Neil wants me just as much as I want her—she just doesn’t want to admit it.

Good thing I’ve never been one to back down from a challenge.

*Deal Takers is the second installment in the Dealing with Love world but can be read as a standalone. 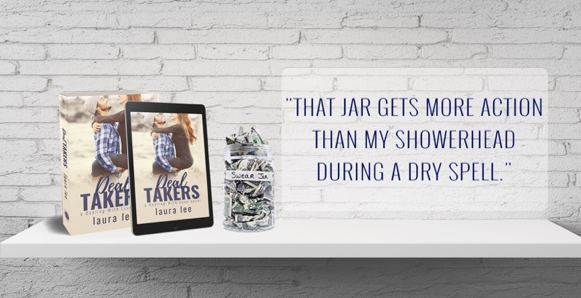 Okay so maybe taking Viagra wasn’t the smartest idea after all. Let me be clear that I don’t need it; I’m a healthy twenty-three-year-old guy. And I’m hung like Justin Bieber, only thicker. Yeah, I saw the pictures online—color me curious. But back to my predicament: My buddy swore the little blue pill is the ultimate sexual enhancer so I decided to partake. I’d like to point out that most guys don’t regularly get the chance to have a horizontal party with two hot sisters and said chance was presented to me on a silver platter. Before you get grossed out, they’re step-sisters so it’s not as weird as it sounds. And did I mention how fucking hot they are? We’re talking Pamela Anderson from the good ol’ Baywatch days. Not current Pam because let’s face it; a Susan Sarandon she is not. I mean seriously, could Suz be any sexier? She’s aged like fine wine—a vintage I’d drink like a motherfucking Slurpee. Great, now I’m thinking about banging hot MILF’s which certainly isn’t helping my boner situation. I’ve always had a thing for older women.

Anyhoo, I’m getting off track again. Where was I? Oh yeah, I’m sitting in the Emergency Room parking lot talking to my painfully hard dick. The commercials warn that you should seek medical attention if your erection lasts more than four hours. Well, here I am, EIGHT hours and TWO ROUNDS with the sisters later, with a fucking hard-on that won’t quit. If I didn’t know better, I’d swear I was being punk’d.  Who would’ve ever thought I’d be complaining about my dick staying hard for too long? If you’ve never suffered this cruel fate, let me assure you; it fucking hurts. I think I may have actually broken the poor guy. He’s raw from way too much friction and don’t even get me started on how difficult it was to take a piss.

Think, asshole! Think! I close my eyes and concentrate on some of the most non-erotic things I can think of: Kittens. Grandma Ethel. Munchkinland. Damn it, that last one made me scream like a girl but my spaceship is still ready for liftoff. Don’t let anyone tell you otherwise; those creepy high-voiced fuckers are terrifying. TERRIFYING I TELL YOU!

I slam my head back into the seat, take a deep breath, and groan in frustration. I rip the keys out of the ignition and slide out of my truck as carefully as possible. With the front of my shorts tented in the most obvious way possible, I stroll through the automatic doors of North Seattle Memorial and walk up to the lady at the front desk. The look of revulsion on her face as she eyeballs my pocket rocket matches my level of embarrassment.

“May I help you?” she inquires with a side order of stink eye.

“Um…” I nod toward my bulge. “I think I should see a doctor about this.”

Her eyebrows reach her hairline. “What seems to be the problem, sir?”

“I see. So, your chief complaint is that you took some Viagra and you think you may have broken your penis as a result?”

I glare at her. “Lady, do you not know the purpose of Pig Latin?”

I swear to God her lips twitch. “I’m sorry, sir, but the purpose behind Pig Latin is not in the Employee Handbook.” 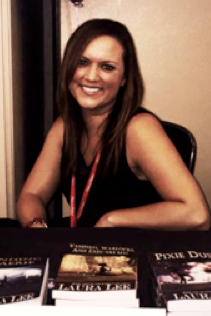 AUTHOR BIO:
Laura’s passion has always been storytelling. She spent most of her life with her nose in a book thinking of alternate endings or continuations to the story. She won her first writing contest at the ripe old age of nine, earning a trip to the state capital to showcase her manuscript. Thankfully for her, those early works will never see the light of day again!

Laura lives in the Pacific Northwest with her wonderful husband, two beautiful children, and three of the most poorly behaved cats in existence. She likes her fruit smoothies filled with rum, her cupboards stocked with Cadbury’s chocolate, and her music turned up loud. When she’s not writing or watching HGTV, she’s reading anything she can get her hands on. She’s a sucker for spicy romances, especially those involving vampires, bad boys, or cowboys!