One Knight Stand by Kryssie Fortune and Chatting with the Author

I have such a treat for you today!

Kryssie Fortune came by to present her latest book, AND I got to chat with her about one of my favorite things: knights.

The reason for the topic was, as I told you, her latest story which is such an interesting mix!

The book is One Knight Stand, a contemporary romance by Kryssie Fortune.

Crusader knight, Blaxton de Ferrers rises as a vampire after the Knights Defender steal his soul. Murdered by his cousin, he preys on the people he once swore to protect. His emotions leach out of him. Gradually, he forgets how to feel.

Harriet Mortlake’s a strong, sassy woman who battles her weight and her temper. She’s the modern-day archivist in the castle which was Blaxton’s childhood home. She’s supposed to ferret out the castle’s secrets. Instead, she finds the love of her life.

When danger threatens Harriet, Blaxton steps in. Harriet and Blaxton are a match made in heaven. Except… he’s a vampire and he’s destined for hell.

Here’s what Kryssie tells us about knights.

Are all your knight’s the same? How to tell one Knight from another.

The Templars were warriors who escorted travellers to the Holy Land. Many think they were the first users of traveller’s checks. If you paid in money at the start of your trip, you could reclaim it at your destination. I’m betting they charged commission on the service. They were easily recognisable by their white surpluses and red crosses. The order became wealthy but lending money to kings was their downfall. 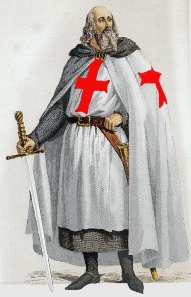 On Friday 13 October, 1307 the French king decided to wipe them out rather than repay them. That certainly wasn’t a lucky date for them. People have regarded Friday 13 as a bad omen ever since. He captured and tortured every Knights Templar he could. Many were burned at the stake. A group of Knights escaped and reputedly made their way to Switzerland where they started the banking system.

Then there’s the Knights Hospitaller – or more correctly, The Order of Knights of Saint John. They founded hospitals and cared for the sick. In Victorian times, they organised the first ambulances. In many countries, their modern-day volunteers are qualified first aiders who attend events such as sports matches to deal with any injuries in the crowd.

Then there’s the Knights Defender. Founded by King Henry 1 they escorted justices throughout the land and brought many miscreants to trial. Their Grand Master dreamed of creating an eternal police force to bring justice where it’s needed. 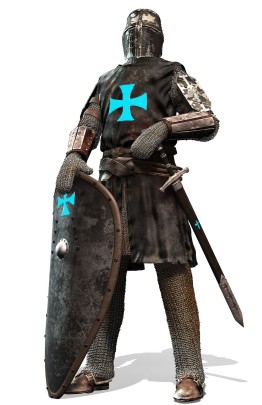 Never heard of them?

That’s because I invented them when I wrote my book, One Knight Stand. In it, the Grand Master turned his bravest and best Knights Vampire to watch over humanity. Turns out that he was a lousy judge of character. Some of his knights became blood drinkers, criminals who preyed on those the Grand Master tried to protect.

Some members gave up their souls voluntarily. Others like Blaxton De Ferrers were tricked out of their soul and left to flounder. For eight hundred years he’s lived alone and lonely. His emotions have faded. So has his colour vision. He sees the word in shades of gray and feels nothing.

Until he meets Harriet.

“How dare you embarrass me like that?” Harriet Mortlake planted her hands on her hips and glowered at the man she’d cornered outside the cafe. Her normal iceberg cool deserted her, and she wanted to slap the condescending smile off his face. Around this stranger, she felt as though lightning bolts flashed from her eyes.

Stubborn. Damn. Male. She’d been showing the big guns from the Castles’ Management Trust around the building. They’d already made it clear they thought her too young for the archivist’s role. This know-it-all had infuriated her when he sounded off in the chapel. Now he antagonized her all over again.

“As if!” Harriet snorted. “No way would medieval Christians build a pagan temple on their grounds. Superstitious locals would have accused them of devil worship. They burned heretics at the stake, remember?”

Despite Mr. Condescending’s interference, she’d impressed the big bosses—she thought. Now the sexiest male, ever, clung to his ridiculous belief the chapel had been a pagan temple.

He flashed her a smile which would have lit up the underground chapel where he’d embarrassed her earlier. He should keep his mouth shut and let her admire his looks. Everything about him radiated sex appeal. Looking at him almost made her anger evaporate, but he gave her the know-it-all look that made her bristle.

“You need to get your facts right,” he told her, determined to have the last word.

Stupid, arrogant male. She couldn’t decide whether to show him her diplomas and degrees or kick his shins. She’d reined in her temper while the higher-ups carried out their inspection. Now they’d left, she felt free to vent her rage. Hands still on her hips, she tapped her foot at him.

“Lost for words without an audience? Or don’t you have any facts to back up your cock-and-bull story? Put up or shut up, Mister. Tell me why you think it’s a temple.”

Mr. Condescending sat outside the castle’s tearoom as if he hadn’t a care in the world. His interference when she’d shown the bigwigs into the chapel could have cost her the job she loved. Whitborough Castle’s extensive records needed cataloging, and Harriet couldn’t wait to get her hands on them. 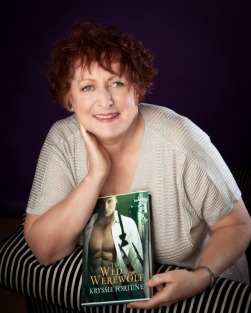 Kryssie likes her contemporary heroes ex-military and dominant. Her heroines are kick ass females who can hold their own against whatever life – or Kryssie – throws at them.

Kryssie’s pet hates are unhappy endings, and a series that end on a cliff hanger.

Her books are all stand alone even when part of series. Plot always comes before sex, but when her heroines and heroes get together, the sex is explosive and explicit. One review called it downright sensual.